CNA and AIG insurance companies love taxpayer dollars, but find reasons not to pay when defense contractors are injured 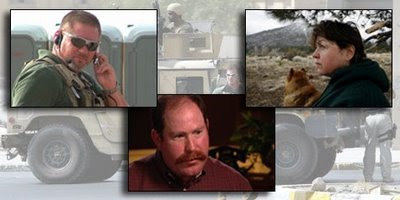 Injured War Zone Contractors Fight to Get Care From AIG and Other Insurers
by T. Christian Miller
April 16, 2009

Reporting from Los Angeles and Washington — Civilian workers who suffered devastating injuries while supporting the U.S. war effort in Iraq and Afghanistan have come home to a grinding battle for basic medical care, artificial limbs, psychological counseling and other services.

The insurance companies responsible for their treatment under taxpayer-funded policies have routinely denied the most serious medical claims. Those insurers -- primarily American International Group (AIG) -- recorded hundreds of millions of dollars in profits on this business.

The civilian contractors have played an indispensable role in the two conflicts, delivering fuel to frontline troops, guarding U.S. diplomats and translating for soldiers during dangerous raids. More than 1,400 civilian workers have died and 31,000 have been wounded or injured in the two war zones.

Yet unlike wounded soldiers, who are offered health care, rehabilitation and support services by the military, the civilians have to battle a federally supervised insurance system marked by high costs and excessive delays, an investigation by the Los Angeles Times, ABC News and ProPublica has found.

In contrast to the public outcry over squalid conditions at some military hospitals, the contractors' plight has drawn little attention.


Could it be true CNA is worse than AIG?
Posted on April 29, 2009 by defensebaseactcomp

That’s what we’ve been hearing. We are getting numerous reports on dealing with CNA’s claims adjusters.

We are reposting this from ProPublica

Note that Daniel is typing with two fingers, the two that they didn’t amputate.

JUST LOOK HOW I HAVE TO BATTLE TO GET MEDICATION. THIS E-MAIL WAS ADDRESSED TO DONNA SRPAGS.

Donna
I’m disputing the facts as per your attorney’s letter claiming I have reached MMI. The fact that I need medication on a continuous base has nothing to do with the fact that have an attorney.

In the time that you used the services of Roger Levy you continued to speak to me via e-mail. Please stop ignoring Unitas’s request to provide me with medication. You sent them a letter requesting that they forward all detail about the medication that i need.

If I do not receive my medication, my health would seriously be affected. IF my health is affected as a result of your refusal to talk to me, I would not hesitate to charge you with criminal negligence is that understood!!!!!!!!!
I’m not one of the locals that are messing with. Stop your childish behavior and pay for my medication. Your are not even attempting to settle any dispute. I will post my e-mails to you on every site on the net possible until you start paying my debts.

I worked in the intelligence/security branch of the Police in my country. Please do not underestimate my intelligence. I leave you with i final thought………….
“I wonder if your friends in Sienna Girls High School in the USA no that your are killings innocent contractors by refusing them medication and benefits”
Please have a good nights sleep and pray before you go to sleep.


WORKERS COMPENSATION INSURANCE (DEFENSE BASE ACT)
(OCT 2008)
(a) This Special Contract Requirement supplements FAR Clause 52.228-3 Workers’ Compensation Insurance (Defense Base Act).
(b) The contractor agrees to procure Defense Base Act (DBA) insurance pursuant to the terms of the contract between the U.S. Army Corps of Engineers (USACE) and CNA Insurance unless the contractor has a DBA self-insurance program approved by the Department of Labor.
Posted by Maura Larkins at 7:13 PM 1 comment:

How can AIG say that they are paying DBA contractor claims when one of their own attorneys published a book on how NOT TO PAY THE CLAIMS (Defense Base Act and War Hazards Compensation Act Handbook 2008 Edition by Roger A. Levy).
Posted by Maura Larkins at 7:04 PM No comments:

Injured War Zone Contractors often find themselves in this battle for medical care and other benefits afforded them under the Defense Base Act.
AIG and CNA ruthlessly delay and deny claims with no remorse for the lives they destroy.
The Department of Labor has served as a poor administrator allowing these insurance company tactics and sometimes even supporting them.
The Defense Base Act itself has been twisted to better meet the needs of the insurance company.

We are injured war zone contractors and family members living this in real time.
Posted by Maura Larkins at 6:50 PM No comments:

WASHINGTON (Reuters) - Countless workers in the United States are trapped in jobs they would like to leave because they cannot get health insurance elsewhere, calcifying innovation and mobility in the world's largest economy.

Daunted by health-care costs, a would-be technology entrepreneur in Texas decides not to start her own business. A communications expert in Washington decides not to strike out on his own. And a freelance magazine editor in Brooklyn decides to take a less satisfying corporate job...

Economists call this phenomenon "job lock," and studies suggest that it keeps between 20 percent and 50 percent of workers from leaving their current jobs.

Because health insurance is tied to employment in the United States, workers who leave their jobs can see health bills skyrocket if they strike out on their own or take a position with a company that offers fewer benefits. Workers who would like to retire early stay on, unable to qualify for the government's Medicare program until they turn 65.

And those who have existing health problems may not be able to get coverage at all.

Job lock is difficult to measure because many employees don't like to advertise their unhappiness. But economists and small-business advocates say it takes an enormous toll on productivity.

"We can definitely say that it's slowing down the rate of innovation," said Tim Kane, an economist with the Kauffman Foundation which promoted entrepreneurship...
Posted by Maura Larkins at 1:32 PM No comments:

...for my money, Rick Scott is the man who best embodies the spirit of the current conservative opposition... Politico recently reported that the millionaire Republican would be heading up Conservatives for Patients' Rights (CPR), a new group that plans to spend around $20 million to kill President Obama's efforts at healthcare reform.

Having Scott lead the charge against healthcare reform is like tapping Bernie Madoff to campaign against tighter securities regulation...the for-profit hospital chain Scott helped found--the one he ran and built his entire reputation on--was discovered to be in the habit of defrauding the government out of hundreds of millions of dollars.

This is the man who will be delivering what Politico called the "pro-free-market message."

A Texas lawyer who shared a business partner with George W. Bush, Scott started his health company, Columbia Hospital Corporation, in 1987. Its growth was meteoric, expanding from just a few hospitals to more than 1,000 facilities in thirty-eight states and three other countries in 1997. As his firm gobbled up chains, like the Frist family's Hospital Corporation of America (HCA), it became the largest for-profit hospital chain in the country. By 1994, Columbia/HCA was one of the forty largest corporations in America, and Scott had acquired a reputation as the Gordon Gecko of the healthcare world. "Whose patients are you stealing?" he would ask employees at his newly acquired hospitals.

The press portrayed Scott as a guru to be admired and feared, "a private capitalist dictator," in the words of one Princeton health economist. "Probably the lowest body fat of anybody I've been in business with," his partner told the Times.

"Other hospitals were intimidated," recalls John Schilling, who worked for Columbia/HCA in the 1990s. Scott was "like the bully that would come into town and if you didn't sell to him or partner with him, he would open up shop across the street from you and put you out of business."

Not long after joining the company in 1993 as the supervisor of reimbursement for the Fort Myers, Florida, office, Schilling noticed things weren't quite kosher. "They were looking for ways to maximize reimbursement...which ultimately would improve the bottom line."

One way they did this was to fudge the costs on their Medicare expense reports. They were "basically keeping two sets of books," says Schilling. The company would maintain an internal expense report, what it called a "reserve" report, which accurately tallied its expenses. "And then they would have a second report, which...they would file with the government, which was more aggressive." That report would "include inflated costs and expenses they knew weren't allowable or reimbursable. The one they filed with government might claim $5 million and the reserve would claim $4.5." Columbia/HCA would pocket the difference...
Posted by Maura Larkins at 1:51 PM No comments:

Interested parties are discussing "legislation that would direct Medicare to reward health-care providers who get better outcomes for patients using less costly procedures."

A team of health-care industry groups that announced a $2 trillion cost-saving initiative Monday expressed little worry about the effect of cuts on their bottom lines, saying that skepticism about the plan is unwarranted.

The groups, which represent health insurers, hospitals, doctors and other health workers, met with President Obama on Monday to discuss their initiative. They have sketched out a 10-year plan to slow the growth of health costs by $2 trillion by drawing down the rate of cost increases in the sector by 1.5% each year...

Meetings among the groups - which also include the American Medical Association, PhRMA and the Service Employees International Union (SEIU) - intensified in recent weeks, with the SEIU taking a lead role. The groups recently have taken to meeting on Saturdays, they said...
Posted by Maura Larkins at 5:48 PM No comments: